FREE AND ALL AGES

Seattle, WA — Astronauts are always brave and billionaires always benevolent, if you believe their PR. But what’s really more important, colonizing the Moon or housing people? Putting a Tesla in orbit or studying global climate change? In a country that heaps undeserved tax breaks on CEOs, in a city with thousands of unhoused people sleeping on the streets, the morality of Seattle’s space-struck billionaires—and the system propping them up—requires examination. The Salish Sea Anti- Space Symposium (SSASS) is a first of its kind event to say NO TO SPACE EXPLOITATION!

With no organized resistance, or even serious questioning, America’s billionaires are racing to claim outer space for their own. This “land grab” of space inevitably puts corporate profits ahead of the fate of earth itself. The Salish Sea Anti-Space Symposium (SSASS) presents a weekend (July 19 - 21) of free events, both thoughtful and humorous, designed to provoke questions around the fervor of space conquest and ask what will happen once the 1% abandon the rest of us on an overheated earth?

A 10 point countdown of opposition to manned space exploitation exposing the colonial origins of space flight, plus the corporate grabs of land and resources in the space rush.

Your posters against space exploitation From Trump’s “Space Force” to Bezo’s “Blue Origin,” America and its elite vie to own space while the rest of us speed towards climate disaster.

Featuring a series of short talks and presentations with time for Q+A. Our venue, Pipsqueak Community Space is a small, casually appointed anarchist hangout. On a lovely July day the door will be open, feel free to wander in and out.

Inequality in America is nothing new and in Seattle the gap between the 1% and the rest of us is growing ever wider. On the 50th anniversary of Apollo, Dixon reflects on his fight for equality in education, healthcare, representation, and more against the backdrop of misplaced government priorities—and accompanying tax dollars—focused on initiatives like the space race. The struggle then was existential for communities, today it’s existential for the entire planet.

Dixon is a civil rights activist, co-founder of the Seattle Black Panther Party, and current President of Executive Diversity Services. A leader in the field of diversity and inclusion, multiculturalism and human rights for over 30 years he’s led organizational development, team building and conflict management programs for government agencies, not-for-profit organizations and corporations.

The first image of earth from space—a finite, radiantly blue, life-supporting planet—radically changed how we imagine and understand the earth. Today, information streamed from satellites has rapidly transformed our understanding of Earth’s atmosphere, oceans, and climate. What do satellites tell us about our warming planet, and what lessons can we draw from the satellite era to inform our attitudes toward space exploitation? This presentation fuses climate science, data-as-music, poetry and ideas from Seattle-based climate researcher and sound artist Judy Twedt, whose ancestors were among the wave of white settlers to exploit and forever change the lands and waters of the Coast Salish Region.

Twedt is a University of Washington doctoral candidate specializing in climate science who makes infosonics from climate data. A native of Tacoma, she has a master’s degree in Atmospheric Sciences where she used global climate models to understand Antarctic sea ice variability. Her work blends data sonifications with natural sound recordings to promote greater awareness of our rapidly changing planet.

The future of the Northwest’s ecosystem, along with the planet’s as a whole, is bleak. The earth’s climate will never recover naturally and the only way for the earth to remain inhabitable is through massive, ongoing carbon sequestration. Perversely, it’s likely our future salvation lies with the same fossil fuel companies that knowingly polluted the planet. As the Trump administration drives climate scientists away from public service, fuel companies will be one of the few sources of large-scale sequestration research and development remaining, and humans will become existentially reliant on them as never before. These are the conclusions of Williams after nearly four decades of study and advocacy for the health of the Salish Sea on behalf of the Tulalip Tribes, including a role in developing the first Puget Sound Recovery Plan (1986) and Western Washington’s first climate assessment (2001), along with his experience working with both the Clinton and Obama administrations and the United Nations on environmental issues.

Williams has worked on behalf of the Tulalip Tribes since 1982 negotiating and planning the management of salmon and their habitats to sustain abundant, harvestable populations. A Tulalip tribal member, he has created and participated in numerous processes, from local to international, to protect and recover treaty trust resources and the ecosystems that sustain tribal culture. He is an expert on the current state of the Salish Sea and the effects of climate change.

Witch Science on the Moon

The secret history of female technologists from the middle ages to the Apollo mission. The Alchemists busied themselves with pursuit of the Philosopher’s Stone, a task they eventually forwent in favor of global colonialism and the search for gold & the Fountain of Youth. Meanwhile the predominantly female healers of Medieval Europe, in intellectual communion with thinkers from North Africa & the Middle East, jump started a technological revolution, concealed in misunderstood ritual and persecuted by the superstitious Church. In this talk I will explain how A Conspiracy of Witches has been hidden in plain site, culminating in participation in the Apollo Mission, a sacred journey for practitioners of secret female technologies.

Trainor is an interdisciplinary artist, writer and performer, her work has been shown and performed locally and internationally. She completed her Masters at the Interactive Telecommunications Program at Tisch School of the Arts/New York University and achieved Doctoral Candidacy at the University of Washington’s Center for Digital Art & Experimental Media.

Manifest destiny, police violence, constellations drawn in red lines. The privilege of stargazing in a world of manmade light pollution. These themes and more populate Elisa’s latest work in progress: an elegy for Charleena Lyles, a Seattle mother of four unjustly killed by police in 2017. From Seattle’s past and into the future, the work asks, who belongs in this space?

Chavez is a poet and writer based in Seattle. She has been an artist in residence at Town Hall Seattle and the Seattle Review of Books, served on the boards of Seattle Poetry Slam and Rain City Slam, and represented Seattle at national poetry slams. She knows almost nothing about love.

Seattle teems with critical sites—far more concerning than outer space—which demand immediate inquiry. Sites that hold incredible promise for scientific breakthrough and discovery, if only we could get the funding. For example, the vast constellation known colloquially as “the gum wall.”

Montgomery is a comedian/storyteller who was made in Utah but has lived in Seattle for most of the 21st century and been failing beautifully on and off the stage for over a decade. When he is not wandering the country telling jokes and falling in love with America, he produces local shows that focus on building community, pushing the limits of what it means to be a performer and celebrating the unique beauty of the city he lives in. 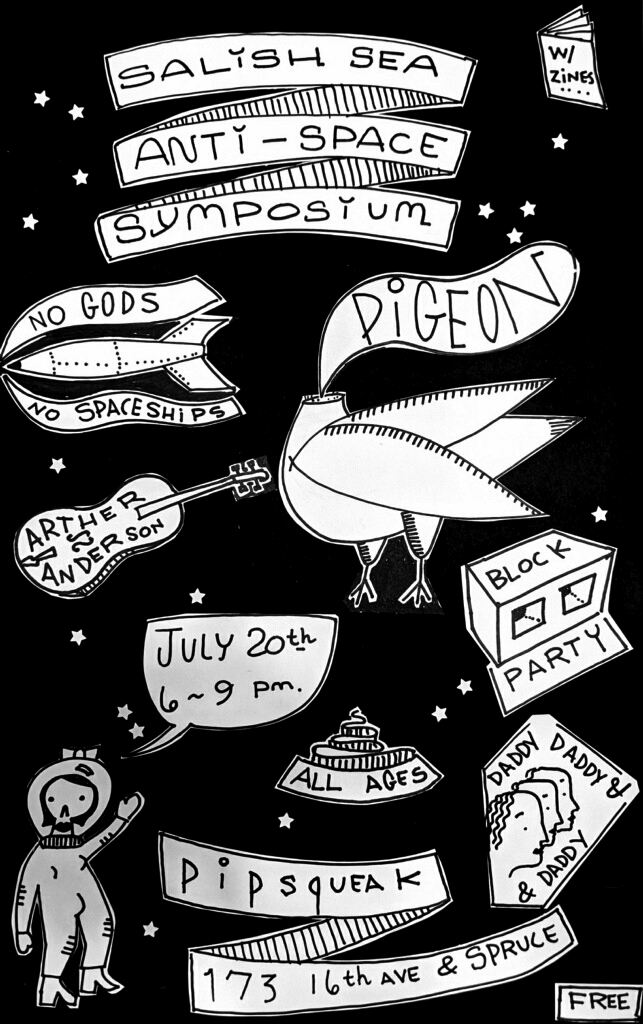 Street party immediately following the Symposium, in front of Pipsqueak on 16th Avenue at the corner of Spruce Street. Live music, a food truck, plus performances:

No Gods, No Spaceships

A lively musical reinterpretation of the Apollo 11 moon landing with child actors singing the famously flubbed lines of Neil Armstrong. Revisit history without the excess patriotism.

An art collective born of a necessity to recategorize & redistribute power & wealth in a city where we all serve Daddy Bezos (among other billionaire daddies). You can be a Daddy, too.

A cellist, performing artist, and anti-capitalist. They write songs about inequality, white supremacy, neoliberalism and the Spectacle of capitalism.

Moody punk band with an appetite for minor chords & a funny smell.

Traditional beef hotdogs or field-roast veggie dogs complete with fixings, all held in a bun by gravity.

“A Highly Opinionated Tour” of The Museum of Flight

Dress in your silvery space best for a highly-opinionated, guided tour of corporate and militarized space knickknacks cloistered in South Seattle. Pull the veil off the faux-patriotic, ridicule space junk worship, resist corporate domination of space— while there’s still time!

A mini-symposium and panel presented in conjunction with SSASS. A series of short (~15 minute) presentations followed by a panel with all presenters, open for discussion and questions. Copies of Don’t Let Them Leave zine will be available.